Otis gives people freedom to connect and thrive in a taller, faster, smarter world. The global leader in the manufacture, installation and servicing of elevators and escalators, it moves 2 billion people a day and maintains more than 2 million customer units worldwide – the industry’s largest Service portfolio.

You can find Otis in the world’s most iconic structures, as well as residential and commercial buildings, transportation hubs and everywhere people are on the move. Headquartered in Connecticut, USA, Otis is 69,000 people strong, including 40,000 field professionals, all committed to meeting the diverse needs of our customers and passengers in more than 200 countries and territories.

Otis Hellas & Cyprus is also leading elevator industry in Greece and Cyprus. It employs 220 people, maintains more than 15,000 elevators, escalators and moving walkways in the Greek and Cypriot territory where it operates, having an expanded network of 12 branches in Attica, Thessaloniki, Ioannina, Korinthos, Kozani, Kos, Katerini, Heraklion, Patra, Corfu and Limassol.

Otis mission is to be a world-class, customer and service-oriented company, delivering its products and services by putting people, their safety and comfort at the center of everything they do. To learn more, visit www.otis.com and follow Otis on: 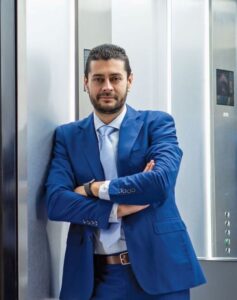 Panagiotis started his career at Otis, in 2007, as Service Manager while in 2011 he was appointed Service Director. In 2017 his has been elected as a Board Member and in 2018 he undertook his current duties of leading the Otis Greece & Cyprus. He is also the Co-Founder of  iLink New Technologies startup company. Panagiotis has worked as a Software Engineer at Intracom and Siemens.

Panagiotis is an NTUA Electrical & Computers Engineer, holds MSc in Computer Science from CMU, MBA from the University of Economics and MSc in Blockchain from MIT. He is a member of TEE, MENSA, SEKEE, ITS (Intelligent Transport Systems) and HBH (Hellenic Blockchain Hub).

He has participated as a speaker in many Logistics Conferences, has been certified as an assessor of GSRT in Information Technology projects, is a deputy board member of ACEO and represents SEV at the Elevators Legislation committee. Panagiotis was born in 1979, he has two daughters and in his free time enjoys tennis and high-speed boating.

You can find out more about which cookies we are using or switch them off in settings.

This website uses cookies so that we can provide you with the best user experience possible. Cookie information is stored in your browser and performs functions such as recognising you when you return to our website and helping our team to understand which sections of the website you find most interesting and useful.

Strictly Necessary Cookie should be enabled at all times so that we can save your preferences for cookie settings.

If you disable this cookie, we will not be able to save your preferences. This means that every time you visit this website you will need to enable or disable cookies again.